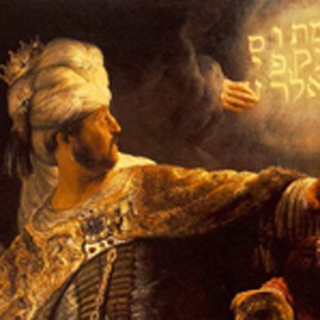 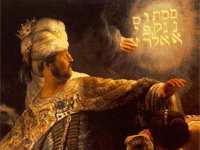 The writing’s on the wall for old views…

…Or more precisely, what is Visual Art? My definition has changed considerably since high school. I once thought that only realistic painting was “true art”. Having studied graphic design, I now realize that the same principles of design that make paintings memorable are also what graphic designers, photographers, cinematographers, and digital sculptors use to make their work memorable. I have since expanded my definition of art to include many mediums and many forms (e.g. Abstract Expressionist paintings). This definition may be too broad for some critics but I will attempt to justify it.

“Modern Art” has had a profound effect on the development of modern graphic design; for example the treatment of shape and color in much of graphic design can be traced to the work of Abstract artists such as László Moholy-Nagy, El Lissitzky, Piet Mondrian, and Wassily Kandinsky. Moholy-Nahy and Lissitzky were particularly influential in the development of typography. Graphic design/Commercial Art has also influenced “Modern Art”. Andy Warhol and Roy Lichtenstein copied the work of comic book artists and graphic designers; they were praised for their “originality”. Graphic Design IS Art. Just as Roman statues inspired the artists of the Renaissance to create art, “Modern artists” have been inspired by commercial art to create their own art. Unfortunately, some critics still assert that graphic art is not “real art”. These critics equate profitability with inauthenticity; artists who profit from their work are “Selling out”.

This view of “true art” as a non-profitable venture is completely wrong and goes against much of the history of art. Da Vinci worked for some of the wealthiest families in Italy. He was not a poor man. Michelangelo didn’t paint the Sistine Chapel just because “he felt like it”; the Pope paid him large sums of money for his work. Prior to the 20th Century, Art was a profit making venture for artists.

The notion that “True artists” suffer and live in poverty while creating masterpieces is an invention of the Impressionists. Because so few of them were able to find patrons (customers), the Impressionists made a virtue out of not selling their work. Many of the great artists of the past (Titian, Peter Paul Rubens, and Rembrandt van Rijn to name a few) were well-paid during their lifetimes for their work. Art critics still point to the work of these wealthy successful artists as examples of what great art can be.

I began by saying my definition of art was very limited in high school. Now I would consider 3-D animation, photography, comic book illustration, and abstract expressionist painting as forms of art. Anytime the human mind considers where to put a mark on page, a canvas, a computer screen or a home, I would consider that art. That is not to say all art is great art. But then for me, Art is Everywhere.